With Miss Masters we have been sketching self-portraits. We had to look at ourselves in a mirror focusing on our face shape and parts of our face that have more shadow. We used sketching pencils to create the shading.

In Maths we have been investigating ways to divide. We moved from grouping and sharing to chunking over time. We decide that using known facts was the most efficient way. 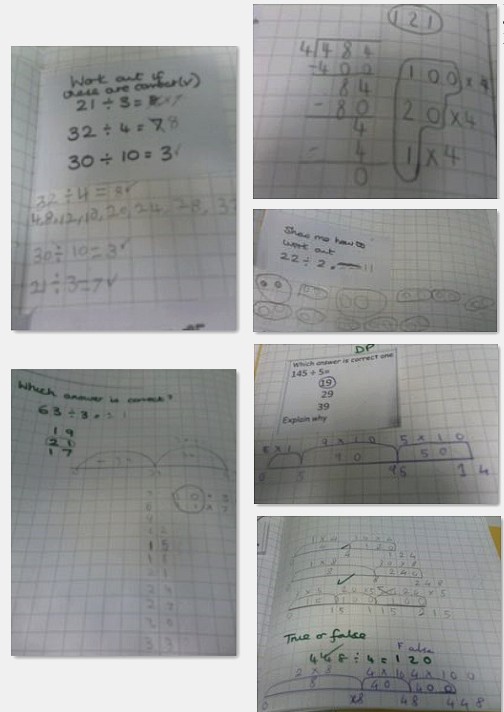 We have become composers this week with Miss Masters. We had to devise a 4 beat melody using musical notation and combine it with a partner to create an 8 bar one. We played these in unison, in a round or echoing each other. 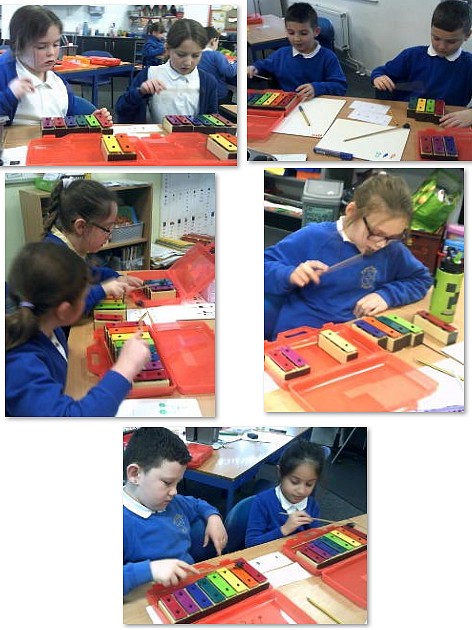 The Mystery of Hieroglyphics

This week in History we learnt about why hieroglyphics were a mystery for thousands of years.

Hieroglyphics can be read down or across.

They are pictures. One picture could be a single letter, a group of letters or a word. They are tricky.

The Rosetta Stone is in the British Museum in London.

The Rosetta Stone has three languages on it.

It was discovered in Egypt.

A Frenchman could read Greek and then translated the hieroglyphs. He found the name of the pharaohs and worked out the letter.

If this man had not done this, we would not be able to read hieroglyphs.

In English we have been writing instructions to mummify a teacher after mummifying Mrs Rogers! 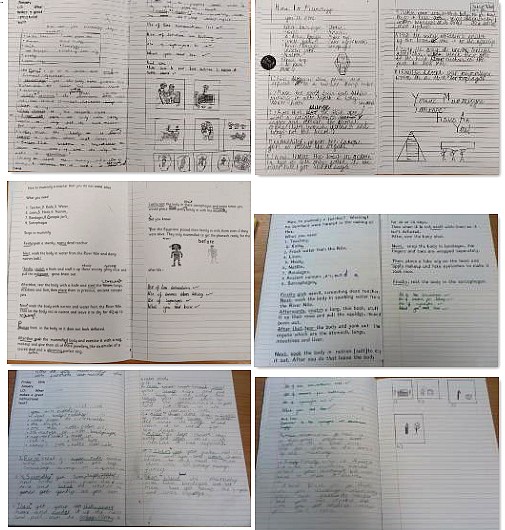 Week 2 in Justice class has been very busy; we started by investigating our zones of regulation by exploring sensory tools to help us when we are feeling in the blue, yellow or red zone to help us get back to the green zone. We used  jumping jacks; bouncing on therapy ball; digging in past and Rice Krispies for objects and hand massage with lotion , discussing how they would help them wake up, calm down, remain in the green zone.

The jumping jacks were good to wake me up; I felt more alive.

I enjoyed massaging my hands as it was calming.

Rolling on the ball helped me feel awake and less worried.

The rolling ball made me laugh and so I was happy.

We also used the breathing exercises from Adele our yoga teacher to do as Wake Up, Shake Up. 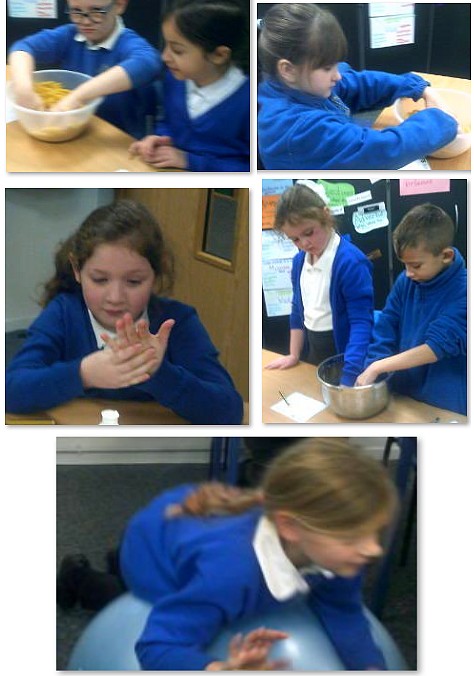 Later in the week we MUMMIFIED Mrs Rogers, using oil, water, salt and bandages. The best part was using a hook to pull out her brain and to cut out her organs to put in canopic jars. Next week we are mummifying a tomato and writing instructions to mummify a parent. Watch out! 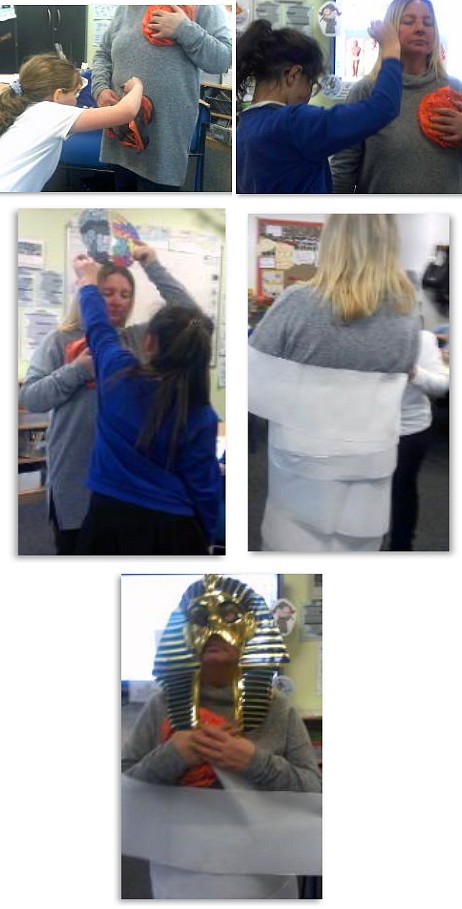 Justice class have been busy collecting discrete data, counting vehicles outside the school, they used tally marks to collect the data and used this information to create their own bar charts making the data easier to read. 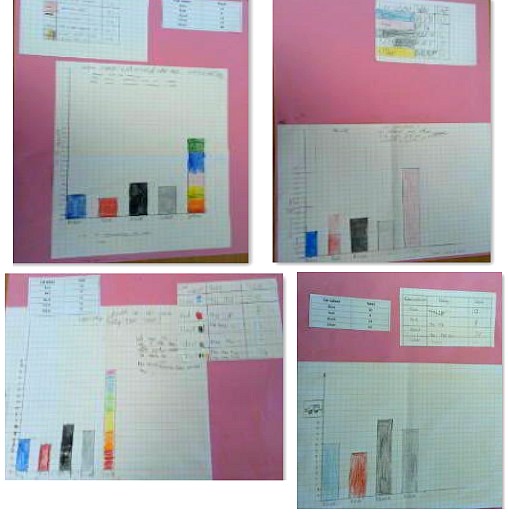 In our RE we are investigating why life is a journey. Here are some metaphors to describe why people often say our lives are a journey. 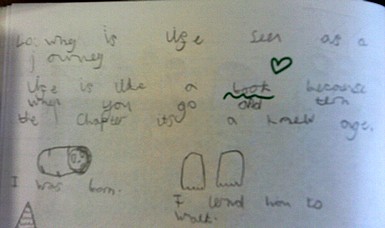 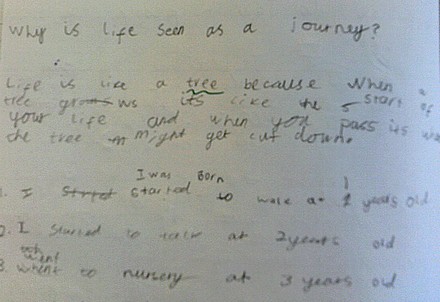 We have been investigating why the River Nile was important to the Ancient Egyptians. Did you know papyrus is a plant that was turned into paper; a shaduf was used to collect water from the river to feed the crops and boats were used for trading goods? 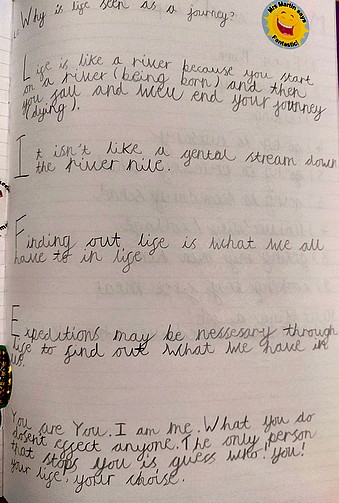 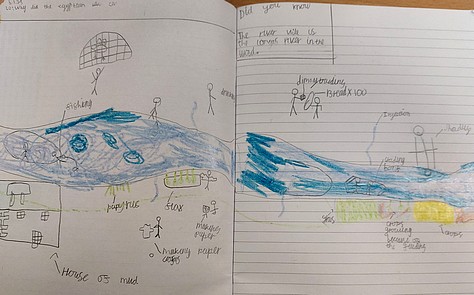 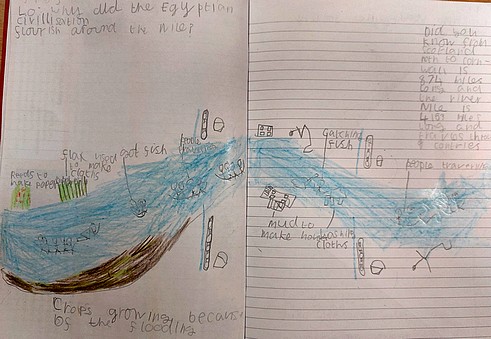 Why do we learn about ancient civilisations? Who were the Ancient Egyptians and how do we know about them? As budding historians, we will travel back in time and develop our knowledge and understanding of how their lives were different to ours and their legacy today. When studying history, we are looking in the mirror at ourselves – looking both backwards and forwards. History helps us understand who we are as society now, how we got here, and what we learned along the way. When looking at ancient history, Ancient Egypt has some of the most incredible, compelling, exciting puzzles and mysteries that can be found in studying how humanity began forming civilizations. For our Learning Lift-off we became history detectives, using a variety of sources to find out about Ancient Egypt. We used artefacts, maps, books, hieroglyphics and images to decipher how the Ancient Egyptians wrote, how Pharaohs lived, what daily life was like and why the River Nile was important.

We investigated each of these and recorded our initial thoughts:

I noticed that all the towns and houses are by the River Nile because they could grow crops.

The rest of the country is desert and hot, so they can’t do farming.

Pharaohs used death masks made of blue gems and gold. They were important.

They wrote using pictures for letters. These are hieroglyphs.

They wrote down and carved them onto walls and coffins.

Ancient Egyptians believed in many gods that had animal faces.

They built marvellous temples to worship their gods.

They used jars with animal heads to put the Pharaoh’s organs in when dead.

We were lucky enough to spend 30 minutes with a visiting yoga teacher, as part of our PSHE and mindfulness lessons. We have been learning different breathing exercise which help us if we are feeling in the yellow or red zone. We learnt about the importance of relaxation and completed moves including 2-person and group poses. We all felt calm rested for the rest of the day. 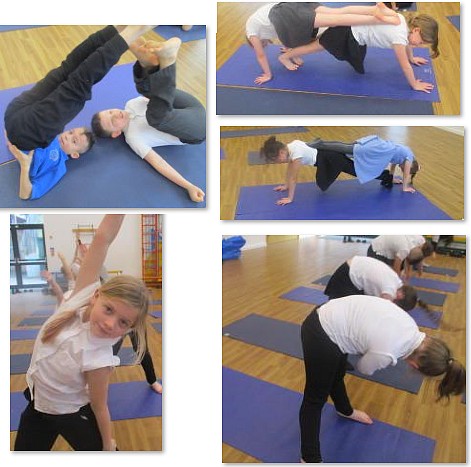